A couple days ago I wrote about a student in my class who was struggling with completing work in my class.  After a breakthrough moment in which I expressed to him the importance of taking risks and not fearing challenges, I wondered if this moment would have lasting effects. Yesterday, I had him again, and while he still had a lot of “Ms. Hertz I _____” moments asking for help and guidance, I could sense a change.

Sadly, he still struggled to complete the drawing, and I felt crushed.  As I dropped the class off for lunch, M___ came up to me and asked me if he could come back to the classroom to work on his drawing.  I looked at him, and seeing his pleading eyes, I couldn’t say “no.”  We walked back to the lab.  I asked him why he didn’t finish it during class. He replied, “They were too loud.” (note: the class was no louder than usual while working on a project)  I realized that he was sensitive to noise while he worked.  In the relative silence of the empty lab, I sat at my desk while he worked on his drawing.  Every once in a while he would ask me how to do something, and I would tell him which tool might meet his needs.  I didn’t get up once or need to model.  The verbal directions I gave were enough.

As he worked,  I could tell that he was constantly seeking approval.  At one point he even asked me whether his drawing was “right.” I told him that his drawing was HIS. The only way that he could be ‘wrong’ was if the assignment was to draw a pig and he drew a boat.  I told him that when I was a child I had an art teacher who told me that I was the ‘boss’ of my art and that no one could tell me how to draw.  I also explained that not all teachers were like that; that some teachers might say his drawings were wrong, but not to worry about it.  He seemed satisfied.

Here is the final drawing: 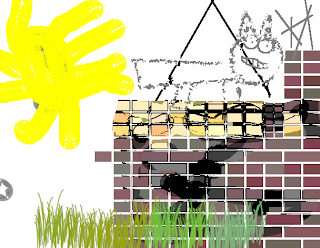 4 Thoughts on “I Love This Job: A Follow Up”