I just had to share a smile in all of the doom and gloom I’ve been sharing recently.

Background: One of my students has spent the last few weeks saying, “I don’t know _____” …fill in the blank with whatever assignment we’re supposed to be working on.  It got to the point where I was feeling hopeless. He would sit for 45 minutes repeating this over and over no matter what kinds of supports, ideas and explanations I tried.

Finally, last week, I pulled him aside and had a short conference with him.  I can’t remember exactly what we talked about, but I know I was exasperated.

Back to today:  We are making avatars for our VoiceThread project.  Here it came: “Ms. Hertz, I need help. I don’t know how to make a face.” “OK, M___, I’m coming.”  I showed him the circle tool and modeled it for him, then deleted what I did and let him play around.  About 10 minutes later, he came up with this: 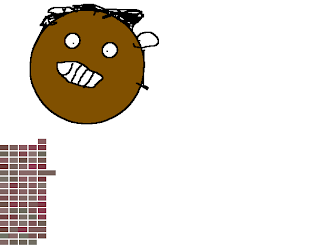 Next he began working on his Three Little Pigs illustration.  He was drawing the wolf, a brick house and the pig.  He pulled me over. “Ms. Hertz, are wolves furry?” “Yes,” I replied. He pointed to his drawing. He had used the chalk tool to blend the edges of his lines to make his wolf look furry.  I could barely hide my joy. (OK, I didn’t hide it at all.)  “See,” I said, “you can’t know how to do something unless you try it first!”

Later that day, his class came for Computers (I teach him every day for an Enrichment period in the morning).  For weeks we had been struggling with his Storybird story. “Ms. Hertz, I don’t know what to write. Ms. Hertz, I need help. Ms Hertz, I can’t find that picture.” In 2 weeks he hadn’t even completed a cover yet. You get the idea.  Today, he sat down, chose a cover picture, wrote a title and completed his first page.  I wanted to hug him.  (The only reason I didn’t is because he probably would have been embarrassed or confused, I know him well enough at this point!)  When he was done, he asked, “Can I work on my drawing?” Sadly, we were out of time, but it was thrilling to see him suddenly not afraid to take risks and motivated to try something that was a challenge.

These small victories and celebrations mean so much to me. Today was a reminder why I could never see myself doing anything else.