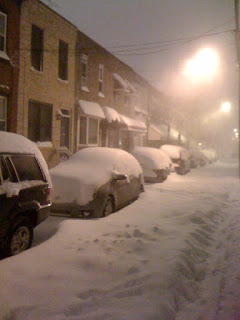 As many of you are aware, this past weekend dumped nearly 2 feet of snow on the city of Philadelphia (23.4″ was the final tally, I believe).  The city barely plowed any of the streets aside from the main arteries.  This left my tiny, dead end street blanketed and all of the cars on the block completely unmovable. 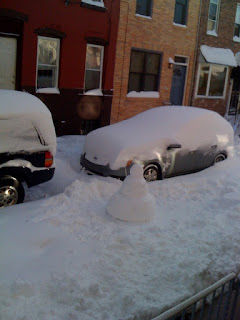 Fortunately, today was a snow day, so I had time to work on getting the car out.  Around 1:30pm, my friend and Twitter colleague, Mike Ritzius brought me a shovel to borrow.  I immediately started digging,  A few feet down the street my neighbor was shoveling her sidewalk. I started working on shoveling the street.  I was set on shoveling a path for my car, even if it took me all day.  I gazed down the block, with its piles and piles of snow and while the task looked daunting, I had no choice. I HAD to get my car out!

A few minutes later my neighbor came closer and asked, “So, what’s your shoveling goal, here?”  I told her that I was just trying to clear enough to get my car down the street. She offered to help.

Within minutes, another neighbor came out with his shovel, saying “I just came to join the shoveling party.”  I responded, “And what a party it is!”  The three of us got to work.  About half an hour later, another neighbor came out to clear off her car and a few minutes after that, two more neighbors came out.  While the one neighbor just lent us her shovel and some conversation, the other two started clearing toward the end of the block toward where we were.  Before we knew it, the street was clear enough for me to start pulling my car out.

As I neared the end of the block, feeling celebratory and proud, one of my neighbors signaled for me to open my window.  “You’re tire’s flat,” she told me.  I got out to look. Sure enough, my tire was nearly flat.  I couldn’t believe it.  We started unhooking my spare and searching for the jack.  As we were searching, another neighbor pulled a tube through his basement window toward my car. It was an air compressor for car tires!  He quickly filled my tire up and far as I know, it’s fixed.

A few moments earlier, another neighbor began backing his car into his usual spot at the end of the block, right by where I had stopped my car to check out the flat. We explained what had happened, and he waited while my tire was filled.  Then, he pulled his car out of the way and let me take a spot on the adjoining street while he stopped traffic.  I returned the favor as he backed into in the original spot. 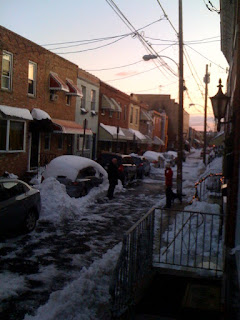 As I walked back toward my house, all I could think was, “wow, I live on the best block!” We’ve only lived here a little over 2 months.  When I returned back to the block, I kept digging out the street with the newest shift of neighbors who had been inspired by our handiwork and were now digging out the unshoveled parts of the block and digging out their cars.  “See what it takes to meet your neighbors?!” I joked.  I finished the end of the block with two new members of our shoveling crew.  At one point, one of the women on our block stuck her head out of her door with a bottle of white wine in her hand saying “thanks, guys, please take this!”  We stuck the bottle in the snow to keep it cold while shoveling.

At the end of the afternoon, I looked down the block, amazed at the hard work and teamwork that enabled us, as neighbors but complete strangers, to come together to accomplish a mutual goal.

Of course, I always apply all of my life experiences to teaching and my job.  My correlation was this:

My neighbors and I pulled together in a time of need to help each other out when there was no one else to help us.  We took charge and accomplished our goal while making new friends and getting to know each other better, building a closer community.

Right now, the teachers in my school are in need of help and support, and it’s not coming from above.  Seems like we need to pick up our proverbial shovels and get down to the business of achieving our goals without waiting for help from the outside. 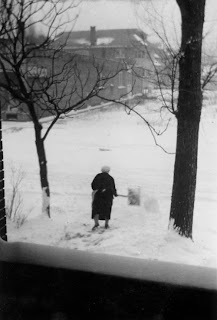 In fact, I’m pretty sure that it’s not just the teachers in my school.  Teachers everywhere are struggling with the effects of high stakes testing, more demands without more time to fill them, the prospects of having their pay directly tied to how their students perform on state tests, and budget cuts creating shortages in materials, staff and basic needs.

If you find yourself in such a seemingly no-win situation, I implore you to pick up your shovel.  Chances are, there are others willing to help!

2 Thoughts on “More Lessons in Teamwork: My Turn!”